A cooperative effort of the Kearney Public Library Foundation and the library itself, the goal of this event is to bring best-selling, nationally respected authors to Kearney. Now, several years into this endeavor, the event is held at The World Theatre in downtown Kearney. These free, ticketed programs are for anyone interested in books, authors, and informative, entertaining presentations.

Anne Hillerman spoke at The World Theatre on Friday, October 15, 2021. She shared about her life-long love of libraries and books, about how her parents showed her early on in her life how important they are, and how she got started writing mystery novels after her father's passing.

Anne Hillerman continues the mystery series her father, best-selling author Tony Hillerman, created beginning in 1970. After spending many years as a reporter, editor, and nonfiction author, Anne published her debut novel, Spider Woman’s Daughter, in 2013. The book received the Spur Award from Western Writers of America for "best first novel" and, like her four subsequent mysteries, was a New York Times best-seller.

Her books follow the adventures of the characters Tony Hillerman created, including Jim Chee and Joe Leaphorn. Anne elevated one of her father’s minor players, Bernadette Manuelito, to a leading role. In addition to enthusiastic reviews from Kirkus, Booklist, and Library Journal, the New York Journal of Books wrote, “...this fictional universe now belongs firmly in the hands of Anne Hillerman.” Her newest mystery in the series, Stargazer was released in April 2021.

Anne also has published several non-fiction books including Tony Hillerman’s Landscape: On the Road with Chee and Leaphorn - created with husband/photographer Don Strel. In collaboration with St. Martin’s Press, she launched the Tony Hillerman Prize, an award for the best first mystery novel set in the Southwest. The $10,000 prize was created in connection with her work as co-founder of Wordharvest Writers Workshops and the Tony Hillerman Writers Conference.

Like her father, Anne began her writing career in journalism. She worked as a general assignment, education, and arts reporter and columnist before she became the first woman editorial page editor for her local newspaper. When she left full-time journalism to create her books, she kept her favorite newspaper job and wrote weekly food reviews as a restaurant critic for ten years.

Anne belongs to several writers’ organizations including Sisters in Crime, Women Writing the West, and The Authors Guild, and served on the board of Western Writers of America. She is a popular speaker and has represented her state of New Mexico at the National Book Festival hosted by the Library of Congress. In 2019, she received the Frank Waters Award for Literary Excellence. She has often been named a favorite local author in the Albuquerque Journal’s Readers’ Choice Awards and twice received the New Mexico Communicator of Achievement award from the state chapter of the National Federation of Press Women.

When she’s not writing, Anne enjoys reading, cooking, traveling, skiing, and walking with her dog. She lives and works in Santa Fe with frequent trips to the Navajo Nation. 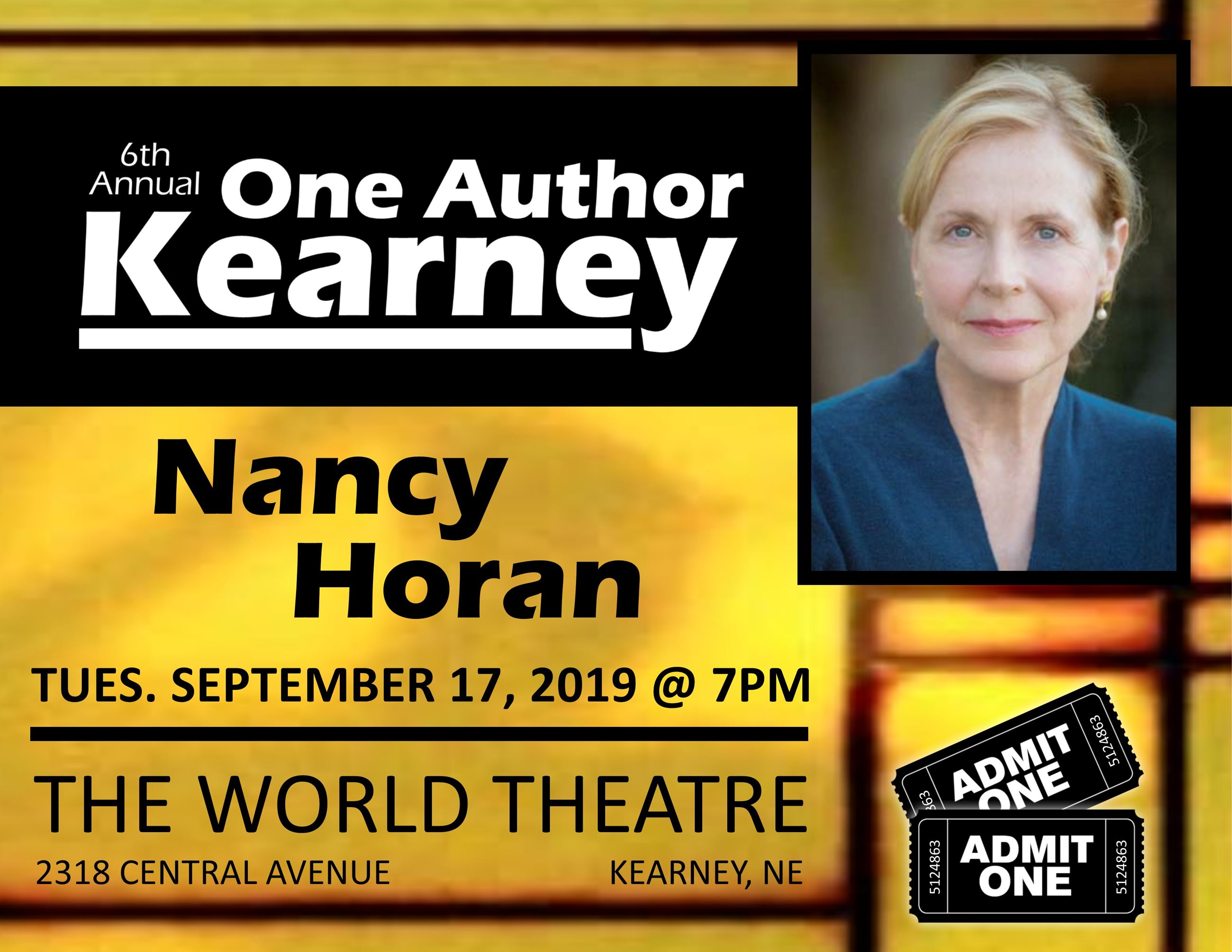 Nancy Horan was the featured speaker on Tuesday, September 17, 2019, at 7:00 pm at the World Theatre. She spoke about the process of writing historical fiction using characters based on real-life people and events. Gail Tsukiyama returned to Kearney as well as an ambassador of Writers for Waterbridge Outreach. Nancy and Gail spoke together, sharing memories and asking each other questions about writing.

Nancy is the author of two novels. Her first novel, Loving Frank (2007) chronicles a little-known chapter in the life of legendary architect Frank Lloyd Wright, and his client, Mamah Cheney. It remained on the New York Times Bestsellers List for over a year. Under the Wide and Starry Sky explores the unlikely relationship of Robert Louis Stevenson and his spirited American wife, Fanny Van de Grift Stevenson.

A native of Springfield, IL, and a graduate of the University of Illinois where she studied literature, Nancy Horan was a teacher and journalist before turning to fiction writing. A longtime Chicagoan, she lives and writes on an island in Puget Sound, where she lives with her husband. 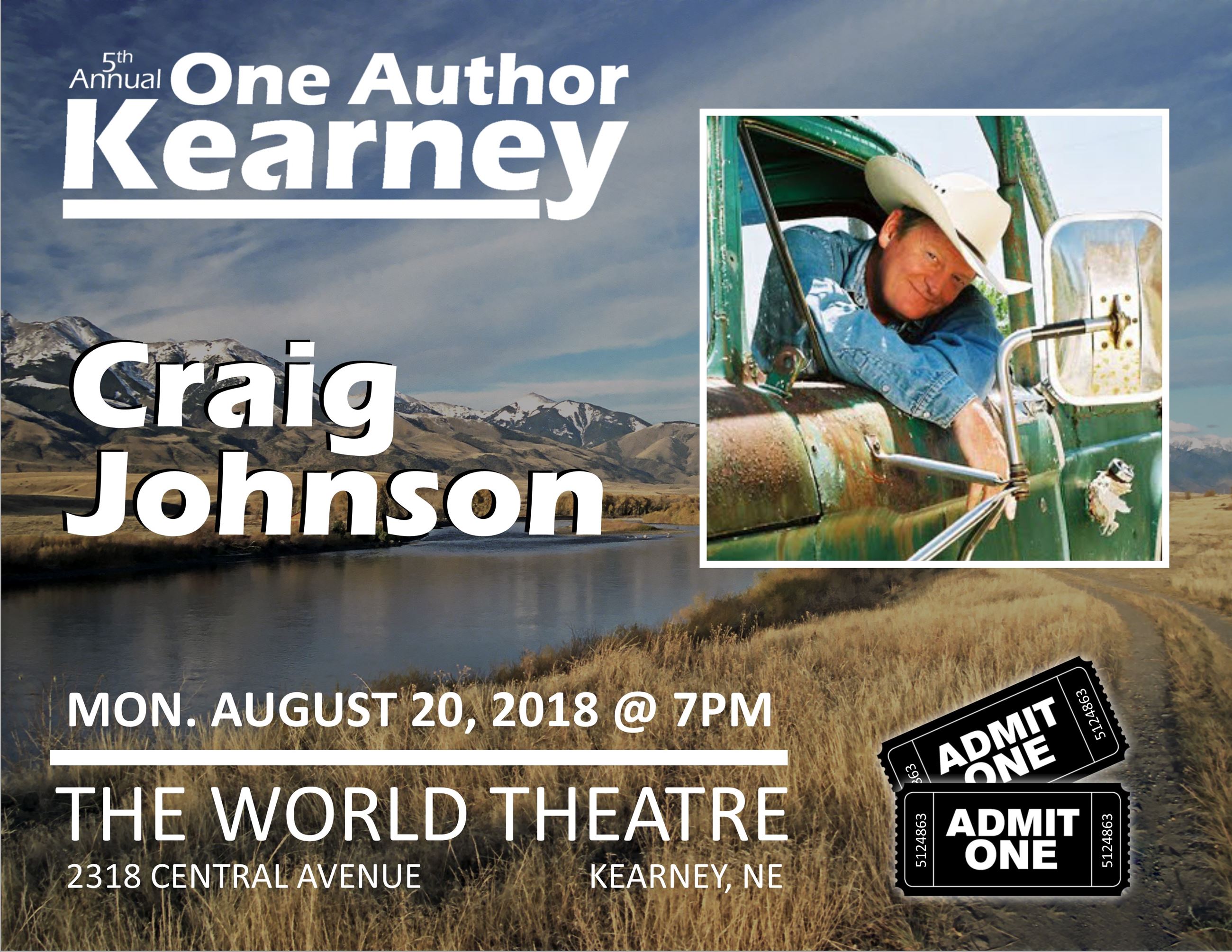 Craig Johnson spoke to an audience of around 350 people in Kearney on August 20, 2018, at 7:00 pm at The World Theatre. He shared humorous anecdotes about the process of writing The Cold Dish and other books in the Longmire series and what it's like to have your books turned into a television series. A Q & A session and a book signing followed his presentation.

Johnson is the New York Times Bestselling author of the popular Longmire series. The series was adapted to television on A&E as well as Netflix. He lives with his wife Judy on a ranch that he built himself in Ucross, Wyoming (population 25). 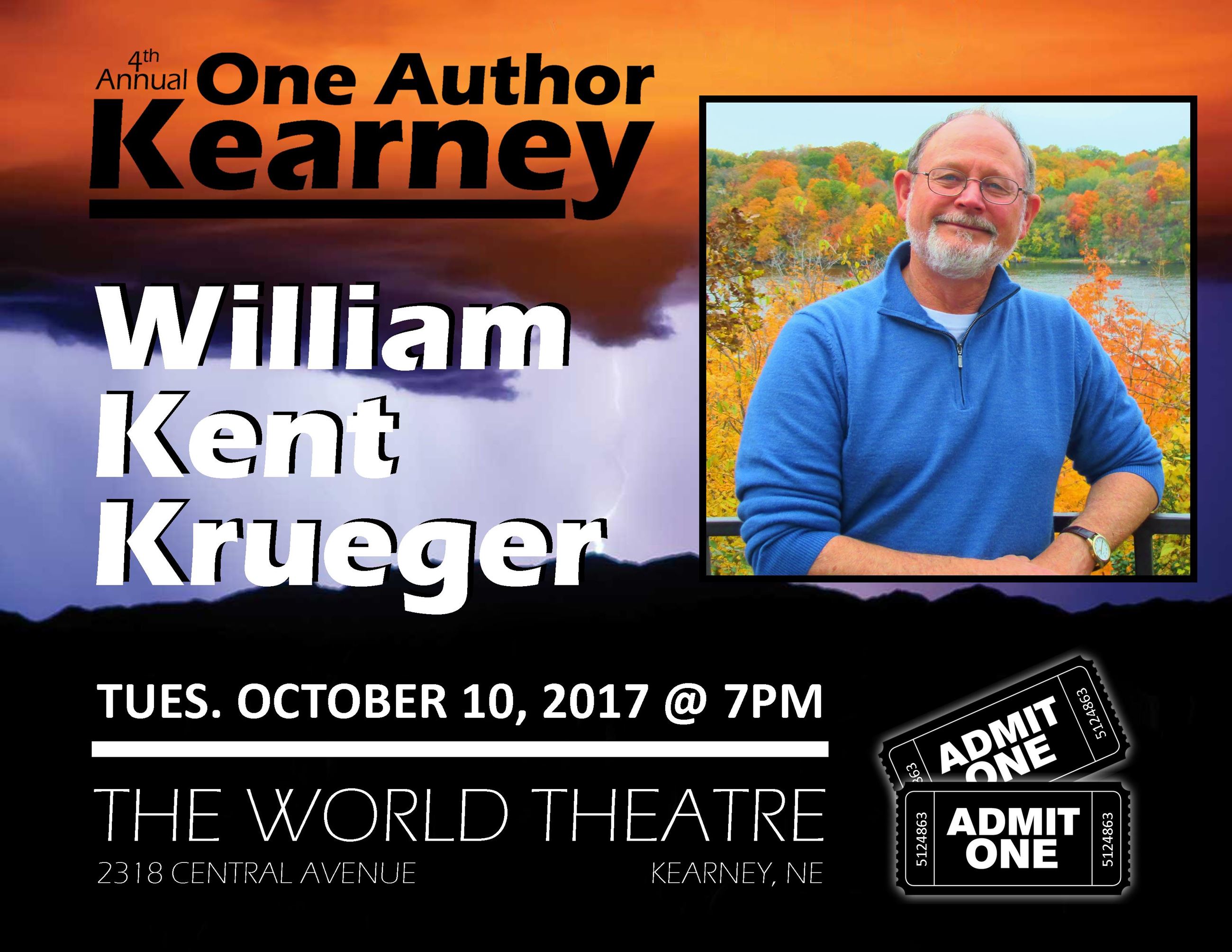 William Kent Krueger visited Kearney on Tuesday, October 10, 2017, at 7:00 pm at The World Theatre. He spoke about writing, reading, and the importance of setting aside some time to be "unplugged" from technology. A book signing followed his presentation.

Krueger is the author of the Cork O’Connor a mystery series set in the north woods of Minnesota and the stand-alone novel Ordinary Grace. His work has received a number of awards, including the Minnesota Book Award, the Loft-McKnight Fiction Award, the Anthony Award, the Barry Award, the Dilys Award, and the Friends of American Writers Prize. He lives in St. Paul Minnesota with his lovely wife, Diane (a Cornhusker by birth). 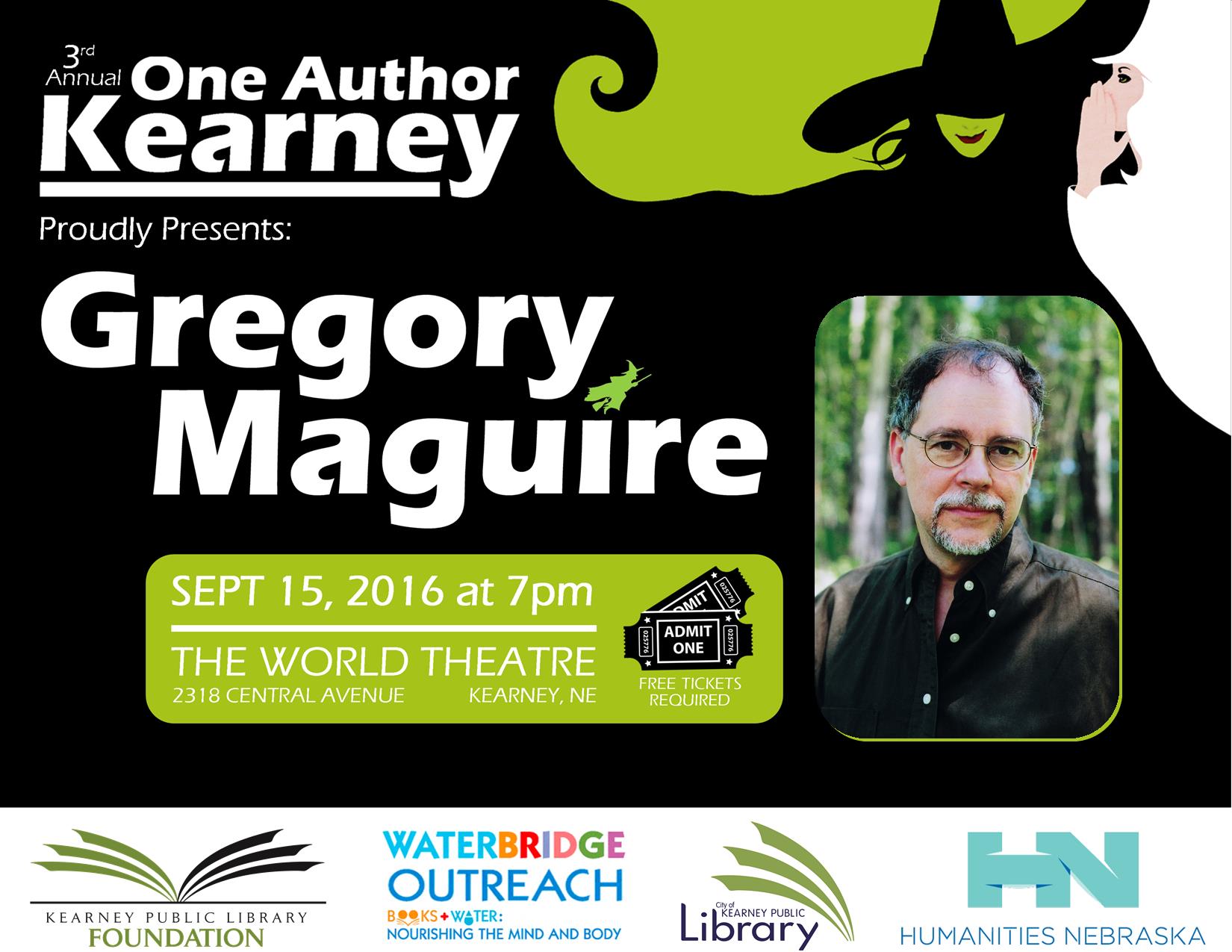 Gregory Maguire came to Kearney on Thursday, September 15, 2016, at 7:00 pm. The event was held at The World Theatre at 2318 Central Avenue, Kearney, NE. A book signing followed his presentation. We were thrilled to also have Gail Tsukiyama back for a third year to share about "Writers for Waterbridge Outreach." This organization is one that Gregory Maguire, Karen Joy Fowler, and Gail Tsukiyama all belong to and support.

Maguire is the author of Wicked: The Life and Times of the Wicked Witch of the West, After Alice, Confessions of an Ugly Stepsister, and several dozens of other novels for adults and children. His adult novels regularly make New York Times and national bestseller lists. He lives in Massachusetts with his husband, Randy Newman, and their three children. 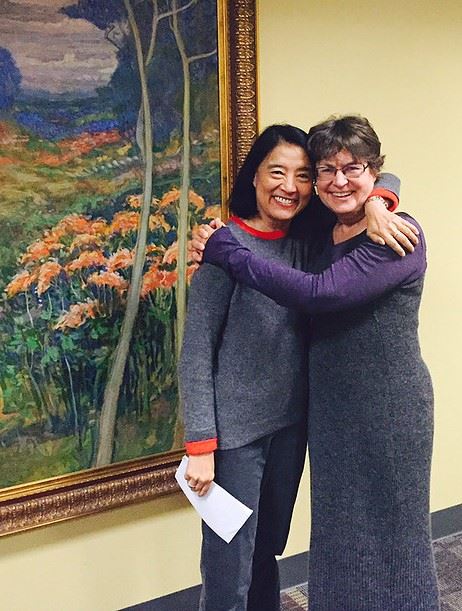 Karen Joy Fowler's presentation was held on Thursday, October 22, 2015, at 7:00 pm at the library. She was accompanied by Gail Tsukiyama who spoke about "Writers for Waterbridge Outreach," an amazing organization that aids impoverished communities by providing water (wells) and books written in the native languages of specific communities.

Fowler is the author of six novels and three short story collections. The Jane Austen Book Club spent thirteen weeks on the New York Times bestsellers list and was a New York Times Notable Book. Fowler’s previous novel, Sister Noon, was a finalist for the 2001 PEN/Faulkner Award for fiction. Her debut novel, Sarah Canary, was a New York Times Notable Book, as was her second novel, The Sweetheart Season. Fowler and her husband, who have two grown children and seven grandchildren, live in Santa Cruz, CA. 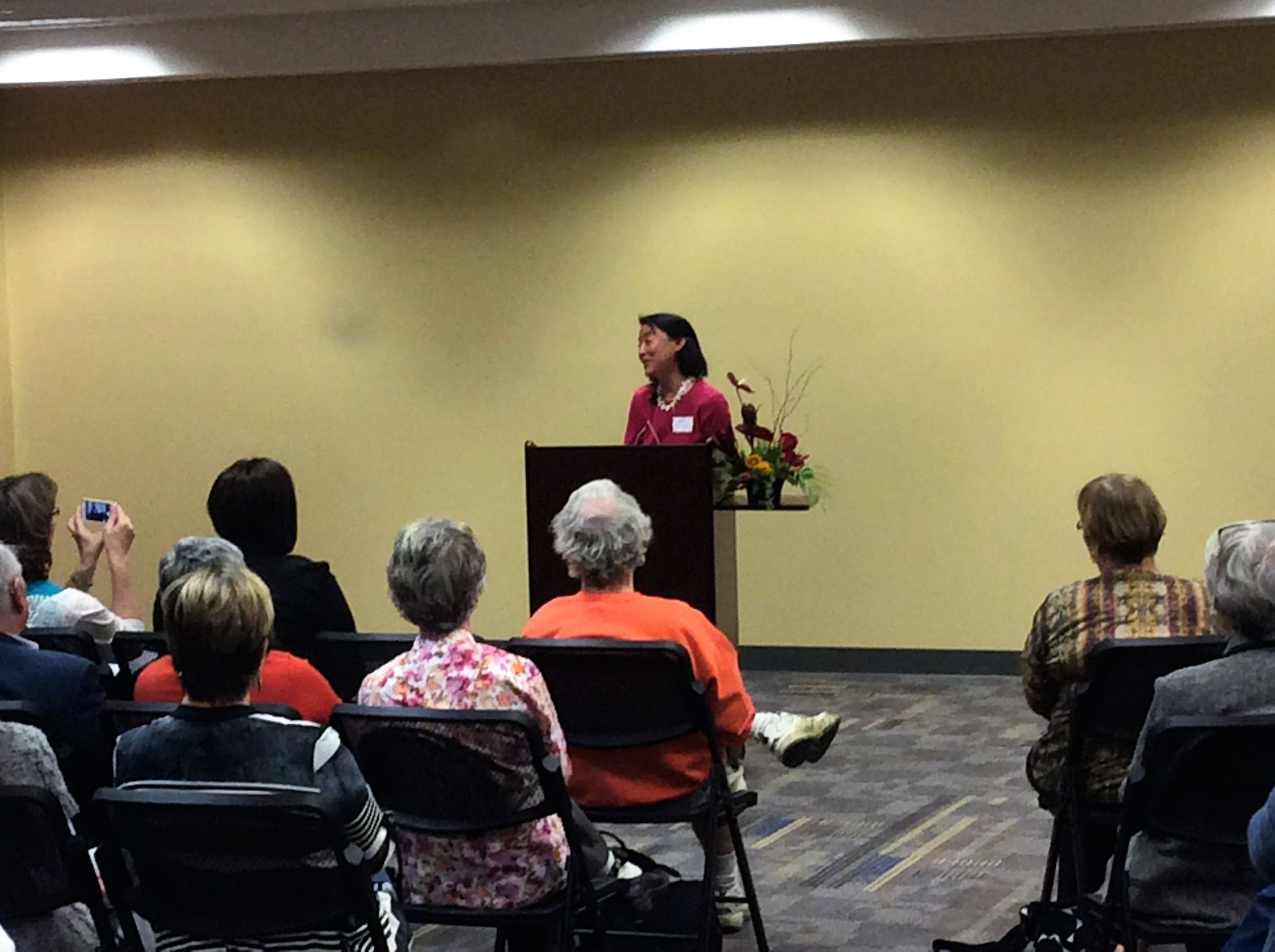 For our inaugural year, Gail Tsukiyama spoke at the library on the evening of October 16, 2014, at 7:00 pm. She entertained and enthralled the audience with her lively stories and anecdotes. Following her presentation, she signed books and met with those who attended.

Tsukiyama's works include The Samurai's Garden, The Street of a Thousand Blossoms, A Hundred Flowers, Women of Silk, Night of Many Dreams, The Language of Threads, and Dreaming Water. She was one of nine authors to appear during the first Library of Congress National Book Festival. She was born in San Francisco, to a Japanese father and a Chinese mother. She lives in El Cerrito, California.